You are here: Home » About » Our Holocaust Scroll

The story of the orphan scrolls

In 1942, a group from Prague’s Jewish community devised a way to bring religious treasures from deserted communities and destroyed synagogues to the safety of the Central Jewish Museum in Prague. Under Nazi supervision, collating under near impossible conditions, everything was catalogued meticulously. Every scroll was labelled in Czech and German, giving the name of the community and congregation from which it came. All of the museum’s curators and cataloguers were eventually transported to Terezin and Auschwitz, with only two survivors, Karel Stein and Hana Volavkova. After the defeat of the Nazis, the scrolls remained in the disused Michle Synagogue, near Prague, for twenty years, until the communists, desperate for money, stumbled across them. The scrolls were not theirs to sell, but that hardly mattered.

In 1963 Eric Estorick, a London art dealer, was offered the opportunity to purchase the 1,564 Scrolls of the Law, stored by the Museum. He contacted a client, Ralph Yablon, who in turn approached Harold Reinhart, Rabbi of Westminster Synagogue. Together they asked Chimen Abramsky, a Hebrew scholar, to go to Prague and examine the scrolls.

Through the generosity of Ralph Yablon, the scrolls were bought and transported to the synagogue, and through the vision of Rabbi Reinhart and the meticulous administrative work of Ruth Shaffer, they were sent out to synagogues and organizations across the world. The full story of how the scrolls came to London can be found in the book Out of the Midst of the Fire by Philippa Bernard.

Of the 1,564 scrolls, 216 lost their tags somewhere along their way, and cannot be traced to any community. They became known as orphan scrolls.

The story of WRT’s orphan scroll 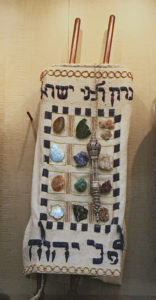 In January of 1967, Westchester Reform Temple received a Holocaust Torah scroll on permanent loan from the Memorial Scrolls Trust in London, which had been set up by the Westminster Synagogue to care for the scrolls. Our Czechoslovakian scroll is on display in the main Sanctuary ark clothed in a covering fabricated by members of the Temple Sisterhood. The design and execution of the mantle were conducted by Bernice Meyerson and Betty Goldstein, with the help of Louise Adell, Sondra Plaut and Jean Schwartz. It is based upon the description of the robe and breastplate worn by Aaron, the High Priest, in the days of the first sanctuary. The 12 stones represent the twelve tribes of Israel, ancestral family of the Jewish people. In fitting tribute the embroidered words read: “A remembrance for the children of Israel . . . before the Lord.”

A certificate that accompanied our scroll reads “The Sefer Torah MST#1357, which this certificate accompanies is one of the 1564 Czech Memorial Sifre Torah which formed part of the treasures which were saved by being collected in Prague during the Nazi occupation 1939-1945 from the desolated Jewish communities of Bohemia, Moravia and Silesia, and which then came under the control of the Czechoslovak Government for many years. The Scrolls were acquired, with the help of good friends, from Artia (the Czechoslovak State Cultural Agency) for Westminster Synagogue, where they arrived on the 7th February 1964. Some of the collection remain at Westminster Synagogue, a permanent memorial to the martyrs from whose synagogues they come; many of them are distributed throughout the world, to be memorials everywhere to the Jewish tragedy, and to spread light as harbingers of future brotherhood on earth; and all of them bear witness to the glory of the holy Name.” Unfortunately, the date and place of origin of this Scroll are unknown.

Although the words from one Torah scroll to the next never vary, each orphan scroll now has its own unique story. For more than fifty years, here at Westchester Reform Temple, we have reserved reading from this scroll for only three significant occasions each year. Our Shoah scroll is read on the afternoon of Yom Kippur, when we declare the Holiness Code (Leviticus 19), on Shavuot by our Confirmation Class, who come to the Torah to re-affirm their commitment to Judaism, and at the Service of Responsibility which we observe on or near Yom Ha-Zikaron La-Shoah v’la-Gevurah, the Day of Remembrance of the Shoah and of Heroism.

Beyond these three sacred occasions, WRT’s orphan Torah scroll is part of the shared memory of our congregation, a daily reminder of our commitment never again to stand idly when the blood of humankind is shed in genocidal hatred. It is a witness not only against human evil, but to the moral greatness we can achieve.